It has become a regular staple in the lives of many football fans down the years. When late September/early October rolls around, the world prepare for the next installation of FIFA.

However, this year has seen some of the fiercest feedback ever seen within the FIFA community.

Let it out, nep. Many people do hate this game, it’s a complete disaster. I had more fun on fifa 18, this game is something else.
Ea are lucky it’s a football game so people stills find a way to play.
– Daniel Kidd (@Daniel_kidd7) 4 November 2018

After playing fifa for 10 years, I can finally confirm with fifa 19 that fifa is Crap… Probably the worst game I have ever played. It’s a shame coz I was looking forward to EA improving on fifa 18. Everyone who bought it, has been robbed.:pensive::unamused:
– Daneh (@D1nies) 6 October 2018

Despite the changes that EA sports have made to the game, such as adding timed finishing and a variety of ‘house rules’ to the kick-off feature, fans are clearly not happy with the latest update.

And they let creators EA sports know through the official Microsoft Store.

A quick scroll through FIFA 19’s review page on the store will show you exactly those who bought the game are feeling.

Some of the reviews are well structured and thought out, such as the one featured below. 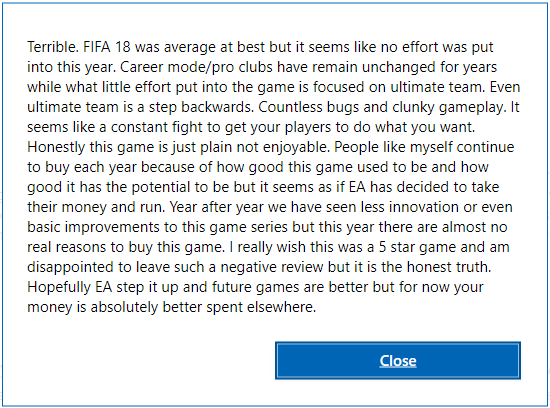 However, most of the criticism is rather humorous rather than damning of the product EA have created.

Another bad review, albeit more hilarious is included below.

Another user has titled his scathing one star review as: “DON’T BUY EVEN IF FREE”.

If it is free, then isn’t the game being gifted to you rather than buying it?

Regardless of the semantics, the criticism comes as a shock as the game launched with favourable reviews back in September.

“FIFA 19 is a definite improvement on last year’s effort, despite not all new additions quite hitting the mark.”

A stark contrast to the one star reviews on the Microsoft Store. Perhaps EA’s fans on other console platforms are kinder on the newest installment.

Do you think FIFA 19 is an improvement on last years game? Or is it one of the worst in years?

Let us know in the comments below.