Jose Mourinho could be back in work sooner rather than later and he’s reportedly told Real Madrid he’s ready and willing to take the job at the Bernabeu once again, under two conditions.

Not wanting to be too insulting but Jose Mourinho is like that cold you just can’t get rid of. After a period of doing damage, when it finally seems to be going, it springs up elsewhere as a cough rather than your previous runny nose- it’s been a tough week or two being in my body.

Mourinho’s time at Manchester United was definitely damaging towards the end. The team seemed in disarray and once again the former Porto manager took a hit to his reputation with poor football, poor results and poor relationships with his players in his third season.

But like the phoenix rising from the flames, or your cold coming back again, it’s unlikely to be too long till Jose returns to management, no matter how badly things have ended in his last three jobs.

In fact according to reports the 55 year old has already turned down the chance to return to Benfica, where he began his management career.

Now there could be a different return on the cards. Mundo Deportivo journalist Francesc Aguilar says that Jose has told Florentino Perez he’s ready now to manage Real Madrid but only if he’s allowed to sign a centre back and a striker. 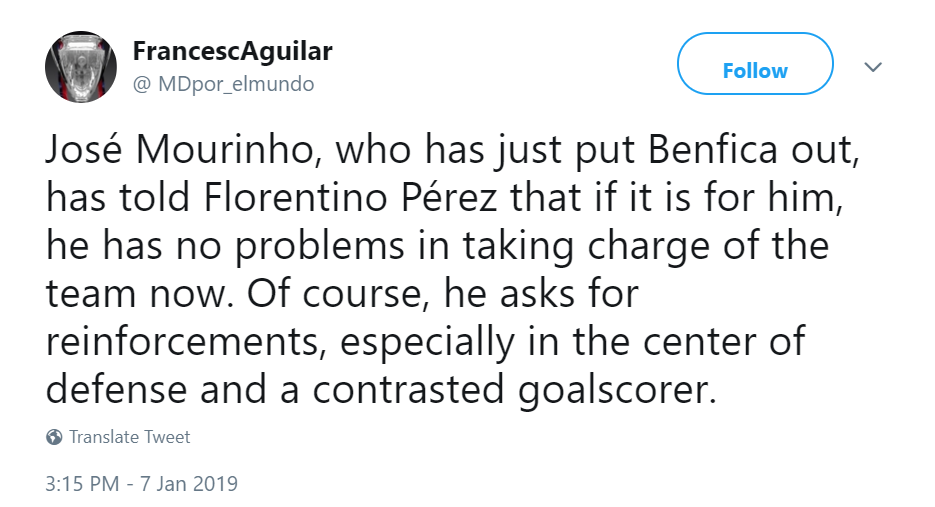 Real currently have Santiago Solari in charge of the club, after the sacking of Julen Lopetegui, but things haven’t gone too well for the club’s former midfielder.

Things have been slightly better under Solari but they have failed to win their last two games and now sit 10 points behind Barcelona and are even outside the Champions League places.

Whether Mourinho would be the right man to turn things around remain to be seen but he continues to enjoy a good relationship with Real president Florentino Perez.