Virgil van Dijk was the best Christmas present that Liverpool could have asked for last season and this Christmas the Reds defender has been given yet another clean sheet as a present.

Last season Liverpool looked very good going forward, their strike force of Mo Salah, Sadio Mane and Roberto Firmino instantly clicked and scared all defences in the league, the problem was at the back.

In the first half of the season Jurgen Klopp’s side were leaking goals left right and centre and seemed in need of a shake up at the back.

On December 27th the Reds were given a late Christmas present as Virgil van Dijk was confirmed as their new centre back, having long been Klopp’s number one target.

The German had said that one player wouldn’t change the fortunes of their defence but he was essentially wrong. Things got much better and Van Dijk was influential as the Reds reached the Champions League final.

This season the Dutchman has only got better and his partnership with Joe Gomez has flourished. The Reds top the table at Christmas and have more clean sheets than anyone, also conceding fewer goals.

So when Georginio Wijnaldum decided to play Santa Claus at the Red’s Melwood training ground it was apt that Van Dijk was given another clean sheet:

Last season Liverpool built their success on their attack and when it failed they struggled to pick up the wins needed to put a Premier League challenge together.

This season they’ve still scored the third most in the league but are behind Arsenal and miles behind Manchester City but their defensive record is second to none. 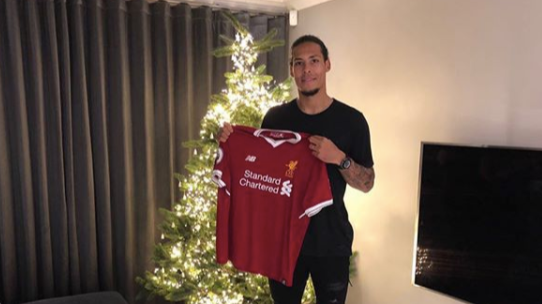 The Reds are on 11 clean sheets with Chelsea and City back on eight each in second. Klopp’s side have only conceded seven and again City’s 13 is second least.

There is no doubting the difference in their defence between Liverpool between this time last year and since they got their late Christmas present.