I’ve seen my fair share of backspin down the years, but AZ Alkmaar midfielder Mats Seuntjens has somehow managed to pull off the most ridiculous, and unlucky, backspin chip you’re ever likely to see.

Seuntjens was convinced he’d made it 2-0 after leaving the goalkeeper scrambling on his line, but the ball bounced and their opponent regained possession.

AZ ended up knocking five goals past PEC Zwolle in the KNVB Cup win, but this bizarre moment grabbed the headlines. HOW?!

Two goals from Oussama Idrissi helped them to a convincing victory, while Guus Til and Fredrik Midtsjø piled on further misery for Zwolle, who were dominated throughout the tie.

Seuntjens, though, couldn’t find the net. He was probably thinking about that shot all game, to be fair.

His reaction after the ball bounced off the goal-line sums it up, really. 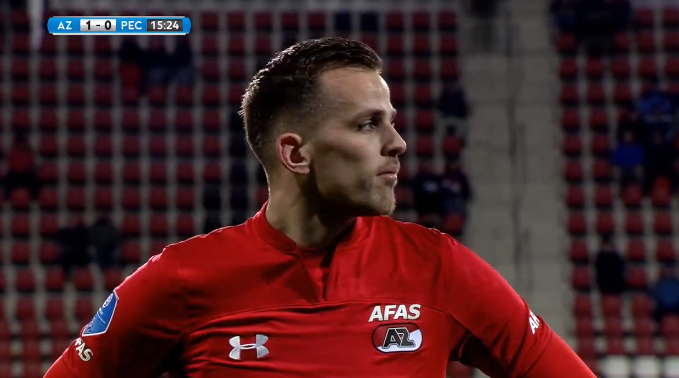 This isn’t the first time AZ Alkmaar have found the headlines. Fans got under the skin of FC Twente defender Peet Bijen last night by nicking his left boot.

The 22-year old’s boot came off in the 56th minute and one AZ fan behind the goal Twente were attacking in the second half, sneakily jumped over the barrier and grabbed the boot – making his way back to his seat and having a whale of a time with the rest of the home fans.

It sparked hilarious scenes in the Eredivisie clash, but Bijen didn’t see the funny side.

Wearing one boot, he went over to the fans to try and get the other one back but all he got was a couple hundred fans waving out at him, while one fan held the boot aloft.

As seen in the above clip, eventually the boot is thrown back onto the pitch, before Bijen trots to the opposite end of the pitch and puts his boot back on.

But the embarrassment has already taken place.AZ went on to win 2-0, with goals coming from Alireza Jahanbakhsh and Joris van Overeem five minutes apart in the 65th and 70th minute respectively.